Notes From the UK (Part I) 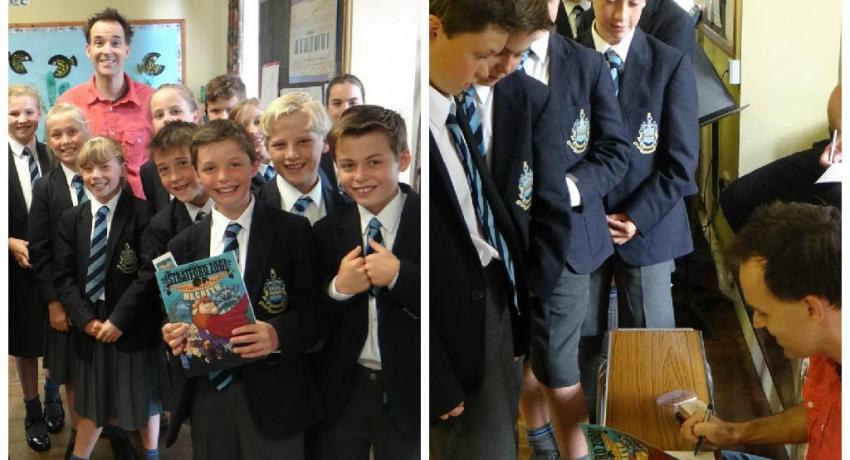 I just got back from England…and boy are my arms tired! Am I right, folks? Hello? Anyone? Sigh…

I don’t have the energy or discipline to create a well-crafted essay about the whole experience, so instead I’ll simply offer a few random thoughts on the experience.

–Allow me repeat myself: I was flown to England to visit schools and talk about Shakespeare. I can’t say at any point in my life that I expected any part of that previous sentence to take place. Life offers up strange surprises.

–The Land of Curry. I wouldn’t actually call what I did “visiting schools in the UK.” It was more like “ate curry non-stop for two weeks straight with occasional pit-stops at schools to let my body digest.” There was beer involved too.

–Uniforms. Kids in England wear school uniforms (see photo evidence above). Thus, at every school I went to felt like I was at auditions for a re-make of Pink Floyd’s “The Wall.” This easily made me the worst-dressed person in the room. Fortunately, I have a long and extensive history of being the worst-dressed person in the room. Just ask my wife. So I was in my comfort zone there.

–Bombing. The bane of stand-up comedians, but a brand new experience for me. It’s a very strange (and very physical) feeling. Flop sweat, a lurching in the stomach, a strange dual-process of plowing through your material, registering that your material is not hitting, and wildly flailing to try and connect with the audience which only makes you feel more desperate and vaguely David Brent-ish.

This was a really interesting experience, and it happened two or three times on my trip. After combing a lot of comedian websites, it seems that bombing is usually a combination of a lot of factors: physical setting, crowd mood, material, the Gods.

Now normally, I talk to elementary age kids (6-10). This crowd is usually pretty easy-going because, quite frankly, I use a projector and screen for my presentation. As the father of two children in that age group, I can tell you that ANY screen time is cause for great joy and wild adulation.

However on this trip, I wound up being sent to a few schools with 12- and 13-year- olds. These kids know screens. They’ve grown up with screen. Simple “screen time” does not impress them.

Plus, to be totally fair to them, my material was aimed towards a younger crowd and I had a hard time adjusting on the fly. I was a pretty bright 12-year-old and I very much remember being really insulted when grown-ups talked to me as if I was still a kid. So to those kids I can honestly say…sorry.

But this was what you call a “learning experience.” I learned that you gotta have back-up material for every age group. I learned that a headmaster threatening kids with terrible fates if they so much as peep during my talk is not really the best way to set the mood for a lecture. And I learned that sometimes you just bomb, so you shake your fists at the skies, curse the gods and move on. Because sometimes…

–You Dance: This was another group of 13-year-olds, but there was something in the water that day. Maybe they were desperate to get out of class. Or maybe they just really needed some entertainment, but one school was amazing.

The kids really enjoyed the talk. There was a general carnival atmosphere and at one point, one kid asked me if I knew how to “whip a nae-nae.” The crowd went crazy at the question. Being a middle-aged human being, I had no idea what any of this meant. I was quickly informed that it was a dance (see video below).

So the kids all nominated one boy to get up in front of the entire school and demonstrate the “whip a nae-nae dance.” So then I proceeded to perform the best nae-nae whipping that I could muster. There was general laughter, applause, and recognition that for someone over the age of 13, I whipped a perfectly adequate nae-nae.

And I can honestly say, that morning as I got out of my car and walked into that school, I did not know that I would wind up dancing in front of a crowd of 300 teenagers.

Life is full of bombs, but it’s also full of wonderful surprises.