Macbeth -vs- The Marshmallow 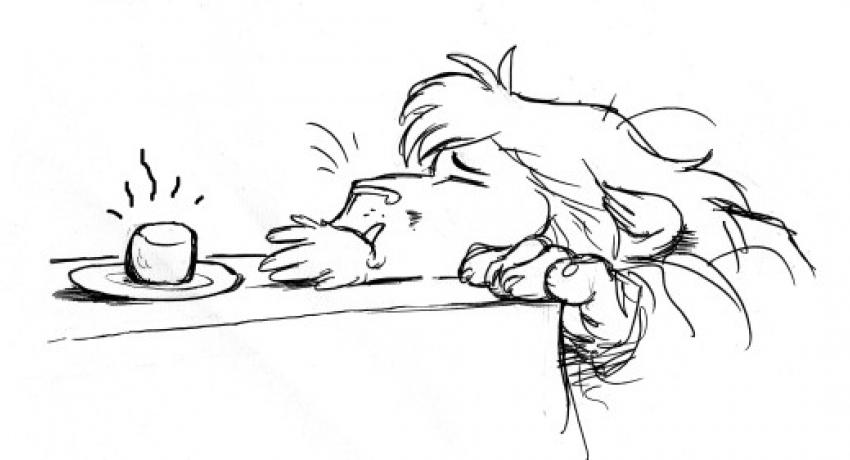 When I tell people that I’ve written a graphic novel of Shakespeare’s Macbeth for kids, most people say, “Macbeth?! You mean the horribly bloody play by Shakespeare? How on earth can you do that for kids?”

Quite frankly, a lot of Shakespeare’s work is a bit tricky to translate for the younger set.

• Hamlet: “Hey kids, who wants to see a protagonist struggle with his INNER DOUBT?! Huh? Anyone? Hello?”
• Romeo and Juliet: My 7-year-old son currently thinks girls are gross. He will not be dissuaded from this opinion.
• King Lear: “Umm…okay, it’s about an old man struggling with dementia and his sense of mortality and…oh, forget it.”

But Macbeth is one of Shakespeare’s most powerful characters because of his simplicity.

“Every character should want something, even if it is only a glass of water.”
–Kurt Vonnegut, Bagombo Snuff Box

Macbeth is all about “want.” Macbeth wants power. He wants to be king. And “want” is something that kids understand far more than adults. Kids are utterly in tune with their wants.

The second that babies are born, they’re crying because they “want”– food, a blanket, to poop. Then as they grow older they want candy. They want TV. They want a bike. Did I mention TV? They really want to watch TV. Preferably while eating a garbage bag full candy.

The entire process of childhood is about teaching kids to push their wants below the surface. We call this process “maturity.” Macbeth is about watching that façade of maturity shatter as that “want” comes raging back to the surface (with disastrous consequences).

The first two acts of Macbeth are essentially the famous Stanford Marshmallow Test. A scientist offers a child a marshmallow and a deal. He’ll leave the kid alone in the room with the marshmallow for ten minutes. If the kid can resist eating it, the scientist will come back into the room with TWO marshmallows for the kid to eat. (Watching them wrestle with this is hysterical. See below.)

Similarly, the witches offer Macbeth his own personal marshmallow test. He can be king; he just has to get rid of the real king first. Can Macbeth resist? Maybe. But it doesn’t help that his wife is whispering in his ear that she wants some of that sweet sweet marshmallow too.

So Macbeth kills the king. He grabs the power. He gives in to his inner child and become a monstrous sociopath, unfit to mingle with the rest of society. He becomes Justin Bieber.

And the rest of the play? Well…the rest is Macbeth with a guilty look on his face desperately searching for someone else to blame. It’s too bad Macbeth didn’t have a younger brother or sister. Then, he could simply point at them, and with a mouth full of marshmallow mumble, “Uhhh…he did it!”

That’s certainly something that every parent could understand.